Is a multivitamin needed on a ketogenic diet

Is a multivitamin needed on a ketogenic diet

Should you be supplementing with a multivitamin on a ketogenic diet

Supplements are just that, to supplement above and beyond an already balanced diet. The problem is and especially on a ketogenic diet, not all needed nutrients are consumed with the available foods choices that make up a ketogenic diet.

In addition to the potential lack of certain nutrients on a low carb diet, even if you are able to eat the foods you need to get all the nutrients your body requires for optimal health, your efforts often fall short because of the low quality food on the market as well as nutrient depleted soils the crops are raised in contain. Furthermore, the overuse of pesticides and chemicals that are used in the treatment of crops greatly reduces their levels.

A famous study done at the University of Texas (UT) at Austin’s Department of Chemistry and Biochemistry was published in December 2004 in the Journal of the American College of Nutrition. They studied nutritional data from both 1950 and 1999 for 43 different vegetables and fruits, finding declines in the amount of protein, calcium, phosphorus, iron, riboflavin (vitamin B2) and vitamin C over the past half century.

There were several other studies with similar findings: A Kushi Institute analysis of nutrient data from 1975 to 1997 found that average calcium levels in 12 fresh vegetables dropped 27 percent; iron levels 37 percent; vitamin A levels 21 percent, and vitamin C levels 30 percent. A study of British nutrient data from 1930 to 1980, published in the British Food Journal, found that in 20 vegetables the average calcium content had declined 19 percent; iron 22 percent; and potassium 14 percent. Another study concluded that a person would have to eat eight oranges today to derive the same amount of Vitamin A as decades ago.

A report comparing the nutritional content of food in 1940 and 2002 shows that the mineral content of vegetables, fruits, meat and milk has fallen significantly over the past 60 years, in some cases by as much as 70%. And the loss of essential minerals – such as calcium, magnesium and iron – from our food can have serious implications for health.

For the ketogenic dieter with regards to animal products, meat, poultry etc – there is declining nutritional content in industrial meats and animal products. The report also examined data from 15 different meats and found that iron levels fell by an average of 47%, with the highest drop being 80%. Compared to 1940, chicken now contains more than twice as much fat, a third more calories and a third less protein. This is likely explained by the quality of animal feed.

So it seems even if we try to eat as many high quality nutrient-dense foods and vegetables, sometimes our efforts fall short. Supplementing with a ketogenic multi-vitamin may be just what we need. 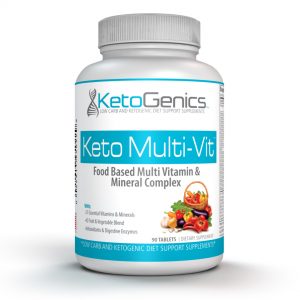 🌟 🌟 🌟 🌟 🌟 5 star review from Henry G.M.J.: Perfect Protein and Delicious DessertThis is a great product. It dissolves and mixes into such a smooth drink, far superior to all other brands that I've tried. Wait, saying it that way sounds like others are terrible and this one is sufficient. No, this one is utterly remarkable. Not grainy, never a lump, no weird textures, just smooth smooth smooth. In addition, the combination of whey isolate and casein is fantastic, (and if you don't know why, research it). And the taste? Again, superior. Even if I didn't need to supplement my protein intake with a shake, I'd want to have a cup of this everyday simply for the way it just satisfies the sweet tooth. And without additional carbs? That's the perfect dessert. I've had one other protein type and flavor from KetoGenics (Iso Whey Pumpkin Spice Glazed Donut) and I feel the same way about that type/flavor as I do this one. Smooth, great tasting, ... perfect. (100% Isolate serves a different purpose than the blend, so having both options provided by KetoGenics is wonderful). I look forward to enjoying many more flavors ... and that's the thing. Sometimes I wish the bottles were smaller so I could hurry up and get another bottle to try another flavor. There are just so many! Gone are the boring days of choosing from vanilla, chocolate, or strawberry. Long live KetoGenics!www.ketoshop.com/products/iced-oatmeal-cookie-zero-carb-protein-powder ... See MoreSee Less

This is the famous Buffalo Chicken Dip from Ketogenics and Keto Diesel with amazing taste AND macros! Each serving has 30 grams protein2.5 grams of fat and only 3 grams of carbs! This recipe is the perfect dip, side dish or just eat as a full meal. Amazing! Must try. ... See MoreSee Less

This is the famous Buffalo Chicken Dip from Keto Diesel with amazing taste AND macros! Each serving has 30 grams protein, 2.5 grams of fat and only 3 grams of carbs! This recipe is the perfect dip, si...
View on Facebook
· Share

Happy National Donut Day! How are you celebrating?

One of our best selling flavors is back in stock!

Another amazing keto and macro friendly creation b